Sliba or Cross is the principal symbol of the Christian religion, recalling the crucifixion and the resurrection of Iso Misiha and the redeeming benefits of His death and resurrection. The Sliba is thus a symbol of both Iso Misiha Himself and of the faith of Christians. The sign of the Sliba is an essential part of Christian life especially of the Liturgy. In ceremonial usage, making a sign of Sliba may be, according to the context, an act of profession of faith, a prayer, a dedication or a benediction. 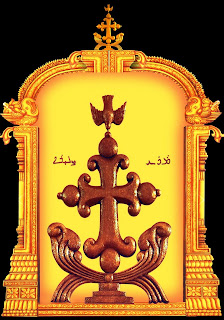 There are many kinds of crosses in Christian world. The Mar Thoma Sliba (St.Thomas Cross), Greek Sliba, Latin Sliba, Patriarchal Sliba, Papal Sliba, Calvary Sliba, Russian Sliba, Celtic Sliba, Sliba of Triumph, Tau Sliba etc are some of them. It is according to the meaning given to a Sliba that it assumes a particular name, qualification and form. Although all kinds of crosses are acceptable and venerable in the universal Church, some Apostolic Churches use their own forms of the cross. Mar Thoma Nazranees have always the Sliba which has been designed according to their own theology. It is known as Mar Thoma Sliba.
On Dec:18 the Church of Mar Thoma Nazranees celebrates the feast of the “Miracle of Mar Thoma Sleeva/Sliba”. The Syriac word Mar Sliba means ‘one who is crucified or the Risen Lord’, i.e.; the one who has accomplished human salvation through the death on the cross and the victorious resurrection. Many ancient documents testify that Mar Thoma Sliba was venerated in all the churches and chapels of St. Thomas Christians. Those who hold that there existed no Mar Thoma Sliba but only the simple Cross in the pre-Diamber period should listen to what Antonio de Gouvea, a Portuguese historian, says about Mar Thoma Sliba in 1606:
“….the old churches were all built in pagoda fashion, but all, full of Crosses like those of St. Thomas miracle cross (at Mylapore) which is called St.Thomas Cross. Hence one can see how much older than Portuguese time is the veneration, love and shape of this cross. For the ancient churches built before, long before the coming of the Portuguese, were all ornamented with them, both painted and graven….”
According to an ancient local tradition, Mar Thoma Sleeha fell dead a martyr on this particular granite stone. The faithful kept it sacred and at a later stage the Sliba, the symbol of their faith, was engraved on it. Modern scholars fix the date of engraving somewhere around 650 AD. In the sixteenth century, as the western missionaries were digging the ground to reconstruct the church on Periyamala (St. Thomas mount), they happened to come across this special Cross. It was on March 23, 1547. When the construction was over, they fixed it to the rear wall of the main altar at the Eastern end. It remains there to the present day. On 18th December 1558 during the Gospel proclamation at the Holy Qurbana, this Sliba sweated blood and water. According to the testimony of the missionaries, the miracle was repeated for several years on the same date and in the same manner. They informed the Pope of this miracle and obtained permission from him to celebrate Dcember 18th as the Feast of Mylapore Cross’s apparition.
It is a historical fact that in the ancient Churches and houses of Mar Thoma Nazranees there were different forms of the Mar Thoma Sliba. Ancient models of the Mar Thoma Sliba are found in the Jacobite churches at Kottayam and Kadamattam and in the Mar Thoma Nazrani Sabha churches at Muttuchira, Alengad, Kothanellur and so on. Another important thing which is to be noted is that the term Sliba is given to persons (Slibakutty), places (Slibapuram) and Churches (Mar Sliba Pally) in our mother Church.
The Mar Thoma Sliba is the dynamic symbol of the death and resurrection of Iso Misiha in the Indian context. It proclaims the Theological, Christologoical, Pneumatological and Ecclesiological dimensions and specifications of Christian faith.
The Sliba without the figure of the Lord reveals fully the mystery of salvation. It reveals the three divine persons of the Holy Trinity, the work of creation by the Father, redemption by the Son, sanctification by the Holy Spirit, the Church which is the continuation of Christ, the Word of God which builds up the Church, the sacraments which are the acts of the Church and the final glorification of the Church.
Mar Thoma Sliba is an empty cross, namely, the cross without the dying figure of Iso Misiha. In imitation of the empty tomb, this empty Sliba symbolizes the resurrection of Iso Misiha.
The four tips of this Sliba are designed like blooming buds. A bud is always a symbol of new life. New life is restored to man in Jesus’ resurrection. Thus the shape of this Sliba itself proclaims the resurrection of Iso Misiha.
The Holy Spirit that descends upon the Mar Thoma Sliba is yet another symbol of resurrection. As St.Paul teaches, the Holy Spirit transforms Jesus’ flesh-body into Spirit body and thus quickens the dead Jesus Christ (Rom 8,11).
According to several scholars, this particular Sliba is erected upon a lotus. The lotus symbolizing Buddhism and the Sliba over it shows that Christianity was established in the land of the Buddha. The lotus flower in which the Sliba is situated can be understood as a cultural integration from Buddhism. Thus the Sliba erected on a lotus, is a living symbol of faith in the risen Lord, established in India.
The lotus in the Mar Thoma Sliba rests upon three steps. The symbolism of steps or ladders is evolved in Christianity in connection with biblical (Gen 28,12) and liturgical traditions. The three steps signify either heaven or Calvary.
Our forefathers were using this supreme sign of their Nazrani faith in every holy places because of the symbolic understanding of it. What is the situation of the Syro Malabarians today ? All their Churches, chapels, institutions and houses are again to be sealed, identified and sanctified by the living and the life-giving sign of the Mar Thoma Sliba. They are to use only this unique symbol of their faith in all kind of liturgical celebrations.
Chavarapuzha Jamesachan.
Posted by മാര്‍ഗ്ഗം at 1:15 PM 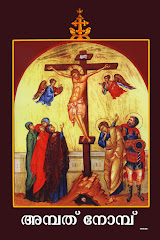 1. The name Syro-Malabar Church is a misnomer. It has to be changed to Mar Thoma Nazrani Church.

2. The Mar Thoma Nazrani Church is by nature a Patriarchal Church and the Head of this Church may be called “The Patriarch: The Gate and Head of All India”.

3. The Mar Thoma Nazrani Church can restore its glory by reintroducing the office of ‘Arkadayakon’ in the fullest traditional sense.

All these external changes may be followed up with others leading to the actualization of my dreams. They are: